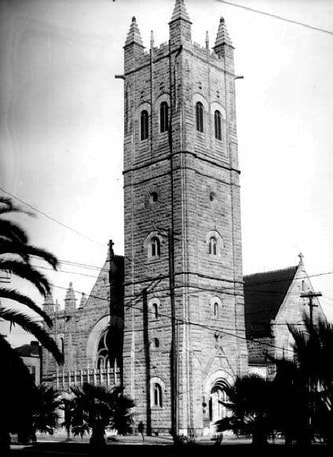 The story of St. Paul's begins in 1836 with the work of a missionary priest from Ohio, the Rev. John Wheat, sent to New Orleans to establish a parish with a small band of communicants. With faith and hope, they gathered on April 28 to worship first in a school room at Lee Circle. The Rev. Wheat was with us only six months, but his vision was made real by the Rev. Charles Goodrich who served as Rector for the next 30 years. The parish grew and moved into a warehouse on Julia St. and then to another schoolhouse on Clio St. In 1839, the first bishop of Louisiana, Leonidas Polk, consecrated a modest building on Camp and Gaiennie Streets. Fifteen years later this building was replaced at the same location by an impressive masonry structure. In less than 10 years the Civil War ensued and New Orleans surrendered early on to Farragut. Gen. Butler closed the church and ordered the Rev. Goodrich out of the city.

On March 23, 1891, fire essentially destroyed that historic building. Although the church was stone, the roof was timber. It went up in flames as did the interior furnishings and historic church records. A gracious invitation from Rabbi Max Heller to hold services in Temple Sinai was accepted for a year until the building on Camp St. was restored. One of our parishioners today is married to the great grandson of Rabbi Heller. The new church was exceptionally beautiful and filled with many gifts and memorials from loving parishioners. In 1903 the Ascension window, deemed "one of the most handsome and costly ($3,800) memorial glass windows ever erected in a church in New Orleans," was installed.

In the 1950’s, the property on Camp St. was expropriated in order to make way for a new bridge across the Mississippi River in downtown New Orleans. A search for a new location followed and land was purchased near Lake Pontchartrain in a neighborhood called Lakeview. The third church was erected at its current location on the corner of Canal Boulevard and Harrison Avenue on April 21, 1957. Many of the historic memorials and furnishings were moved from the Camp St. location, including the original hand carved cypress pews and choir stalls, stained glass windows, the marble pulpit, brass lectern, the angelic Baptismal font, and the Last Supper frieze placed in the new marble altar were but a few of these treasures. The magnificent Ascension window was incorporated as a focal point behind the altar. It has stayed aglow every evening to welcome and inspire passersby.

Seeing a need in the community and in keeping with a long history of commitment to education in The Episcopal Church, the Vestry established a day school in 1960. The school opened in 1961 with 52 students. A second story was added to the main building for classrooms. Over the years additional expansion was undertaken to build a science lab, an art center, gym, more classrooms, and the Susie Dunn Early Childhood Development Center. Thus, St. Paul's Episcopal School developed into an exceptional place for providing quality education in a loving and Christian environment for grades pre-K through eighth.

On September 9, 1965, Hurricane Betsy slammed into New Orleans. The beautiful Ascension window was shattered and strewn across adjacent properties. Neighbors and parishioners painstakingly gathered as many pieces as could be found. The head of Christ was unbroken. The recovered pieces were packed and shipped to Munich for restoration. Franz Mayer & Co. called several craftsmen out of retirement to recreate the original quality and workmanship. Two years later, the window was back over the altar where it remains today.

Another remarkable milestone in St. Paul's history was the ordination of the Reverend Peggy Walker, the first female priest in the Episcopal Diocese of Louisiana, in 1992. The Reverend Walker served St. Paul's as Associate Rector, and later as Rector Pro Tem. She was exceptionally gifted in incorporating the talents and work of the laity into the life of the church.

On August 29, 2005, St. Paul's was flooded when a defective levee collapsed on the edge of our neighborhood shortly after the passing of Hurricane Katrina. A twelve foot wall of water roared past the breach, sending a torrent through Lakeview and other areas of the city. For three weeks the church and school sat under eight feet of polluted water and debris. The result was the total destruction of the first floor interiors as well as two single story buildings that had to be demolished. With 80% of the city flooded and businesses ruined, the tragic scattering of our people ensued.

In the wake of Katrina, St. Paul's not only repaired our own church and school,  we also established a Homecoming Center that was pivotal in the revitalization of Lakeview and other areas of New Orleans. Through the tireless efforts of its staff and numerous volunteers from across the country people were able to move back into their homes, thousands of trees were planted, and, most importantly, the Homecoming Center placed priority on the restoration of the lives effected. While the Homecoming Center was closed in early 2016, its history continues to inspire the outreach ministries of St. Paul's to care for our neighbors in need and those adversely effected by natural disasters nationally.

On August 29, 2021, sixteen years to the day after Hurricane Katrina, St. Paul's was again devastated by Hurricane Ida. Our community once again finds ourselves in recovery mode, albeit for a much shorter period of time. Hurricane Ida's powerful, category 5 winds caused severe damage to our roofs, and brought with her substantial water intrusion across our entire campus. We have been unable to reoccupy our campus since the storm. Students and faculty from our school are forging ahead, continuing to gather in person at four different locations in the Lakeview area. Our church is gathering for worship on Saturday evening at the Harbor Community Collective, our neighbors across the street; and on Sunday mornings at Christ Church Cathedral, our fellow Episcopal parish uptown on St. Charles Ave. Thanks to a lot of hard work by a lot of people, we returned to our campus on Christmas Eve 2021.